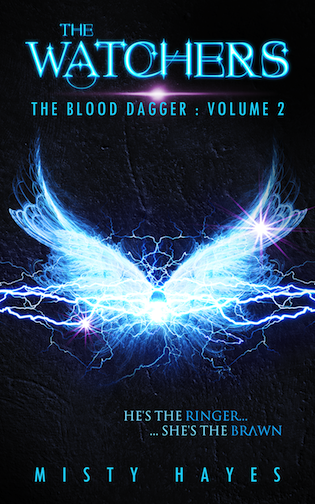 Eighteen-year-old Corinth Taylor didn’t sign up to become a Watcher—an elite warrior destined to restore balance to the human race—he was chosen.

Corinth can barely control his own hormones… much less the deadly blade. And to make matters worse, his best friend, Larna, just so happens to be the very thing he’s supposed to eliminate.

But when vampires and slayer find a common enemy, Corinth knows it’s his innate calling to hunt evil down. And evil has a name: Gabriel Stanton. The enigmatic vampire who escaped their capture, has plans for Corinth, Larna, and Alastair… and it’s a threat they’ll never see coming.

When the line between good and evil gets crossed, devastating consequences start to happen. As Watcher and vampire worlds collide, Corinth must decide where to place his trust: with his old allies or his killer instincts. An upstart slayer. A clan of vampires.

What could go wrong?

It’s only the end of the world.

The Watchers is the second book in The Blood Dagger series, a high-octane paranormal YA thriller.

If you like witty heroines, unconventional relationships, and friendships that can withstand the grave, then you’ll love Misty Hayes’ high-stakes story.

Sink your teeth into a fun, fierce vampire series today.

After walking for about an hour, the tunnel deposited us into a larger cavern. Every inch of space was filled with mushrooms. They were glittering blue patches of bioluminescent light. It was strangely hypnotic and exactly how I imagined another planet might look.

Larna dropped her hand from my shoulder. By the soft glow coming off the walls, I could see her admiring the shimmering fungi with her mouth slightly ajar.

Upon closer inspection, I realized that not all of the mushrooms were glowing. There was a section of fungi that darkened a spot on the wall where Al had stopped.

As I joined him, his voice carried around the cavernous space, making him sound haunted and forlorn. “Bluefoot
mushrooms.” It was the first time he’d spoken in over an hour. He pulled his backpack off and filled it with the
fungi. “I used to cook with these when I lived in France … They taste great in omelets.”

I plucked one off the wall because I had worked up an appetite, and popped it into my mouth and then
immediately spit it out. “Gross. That tastes like dirt.”

Taking a quick swig of water from Larna’s pack, I hissed, “You eat that?”

“They taste better cooked,” Al said, his mouth quirking up in amusement. “But they’re great protein. You
should eat up while you have the chance.”

“I’d rather eat sludge,” I muttered under my breath.

The further we progressed, the more claustrophobic I started to feel. Being in closed-off spaces and in the pitchdark for hours was taking its toll on me. I deposited a pebble from the bottom of my shoe back to its home, noticing for the first time how many blisters I had accumulated during this trek. I couldn’t see them, but I could definitely feel them. Mental note: Converse do not make great hiking shoes. I had a pair of perfectly fine boots, but they were swimming with the fish at the bottom of the ocean. That morning, before Larna dropped my bag, I had switched them out, hoping the gnarly blisters on my feet might heal if I wore a different pair of shoes.

Everything hurt, but I didn’t want to be the first to whine, so I sucked it up, and we continued on … and on …and on … until it seemed like we’d never see the light of day ever again. I felt something dark and sinister twisting its skeletal little fingers into my gut.

That thought sent me into an even more depressed spiral, and pretty soon that depression turned into an infection. What if Al didn’t really know where he was going? What if he was leading me to my death? He loved Larna—he didn’t care about me. They could see in the dark—all they had to do was leave me behind, and I would be lost down here forever. It wasn’t until I felt Larna’s hand shift on my shoulder that I realized she was still beside me.

Still, resentment started to gnaw away at me. 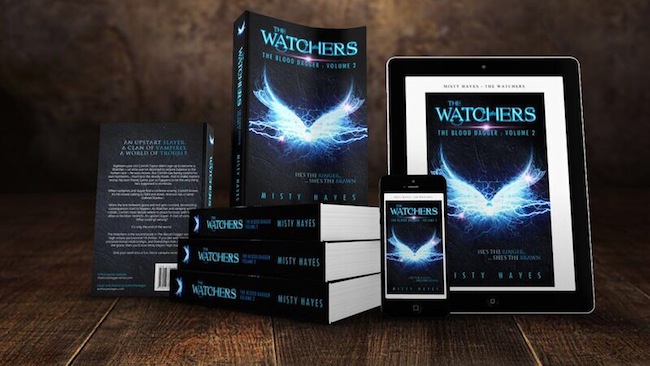 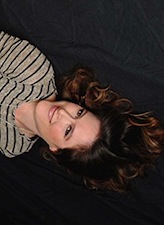 Misty has always called Texas home but has a passion for world travel.

Before taking up writing, she has had a long career in law enforcement. Besides the self-torture of writing books, she also loves the self-torture of running. Misty is currently working on book three of her young adult trilogy in ‘The Blood Dagger’ series. The Watchers – Volume 2 will be released in December 2018.

When not writing, Misty enjoys reading any books by Jim Butcher, Stephen King, Dean Koontz, Joe Hill (Owen King), and J.K. Rowling. A lot of author’s write about pets on their bio’s… Misty has a rescue parakeet named Peeta (As in the Hunger Games).