Happy New Year! I still can’t believe that we are already in 2018. And I know I’m saying that for every new month. But it’s still crazy how time flies!
Today is my stop for the Triple Cross Killer blog tour by Rosemarie Aquilina. 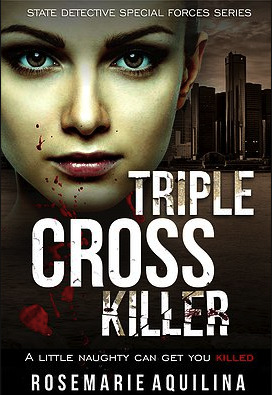 Have you ever wondered what really happens to Santa Claus letters?  In Detroit and Sarasota some children’s letters are diverted and reviewed by Nick Archer, a religiously obsessed, narcissist. Nick responds, leaving a trail of devastation in the two cities.

In Detroit, co-ed partners and wise-cracking lovers, detectives Jaq McSween and David Maxwell, team up with Sarasota detectives Abel Mendoza and his partner, Rabbit, to find this daunting killer.

When Jaq’s friend, the lovely nurse, Rita Rose, takes a chance on love again, she gets caught in Nick’s web. Working with the ME, she joins in, adding her perspective when events take a sinister turn.

Can this diverse team of characters pool their insights, barbs, and taste for bad food to save Rita when she discovers the final clues or will she become the next victim?

The Thriller genre is definitely a genre that I like to read. So I tend to be a little bit picky about books in that specific genre. Triple Cross Killer by Rosemarie Aquilina definitely did not fail my test. I liked it a lot and it kept me entertained the whole time.

It is written in a few perspectives: three to be exact. The killer, a nurse and cops. And the story takes place during the Christmas time. It’s clearly no book that is fast-paced, there are a few murders happening very fast one after the other but the cops don’t have a clue on a potential criminal. While the reader knows who the mass murderer is the other protagonists only find it out until the end. Which on one hand can be a little bit frustrating, to be honest, as you know who it is and you just want to shout at the police who the hell is the criminal but you can’t. On the other hand however it is realistic. In real life, the police don’t find the criminals after a few hours. It takes time and this book portrays the reality. Something I like but I don’t read very often.

The characters were very well developed and you find yourself attached to them after a few pages. And you hope that none of them will get hurt by the murderer himself. Yes, I stressed a lot while reading this thriller! I don’t even have a favourite character as I liked them all the same (apart from the serial killer)

I recommend this book to every lover of the thriller/mystery genre. You will definitely not be disappointed. Go and give this book a try!

Rosemarie Aquilina is the mother of five children. Elected as a 30th Circuit Court Judge serving in the General Trial Division, after having served as a 55th District Court Judge in Mason, Michigan, she takes pride in public serve.

In 1986, Judge Aquilina became the first female JAG Officer in the hi

story of the Michigan Army National Guard, she retired

in 2006 with twenty years Honorable Service.  She is an adjunct law professor at both Western Michigan University—Thomas M. Cooley Law School and Michigan State University College of Law and has earned teaching awards at both institutions. Judge Aquilina is the former owner of Aquilina Law Firm, PLC, and former host of a syndicated radio talk show called Ask the Family Lawyer.

Have you read Triple Cross Killer by Rosemarie Aquilina? What did you think about this book? Or do you plan to read it? Please let me know in the comments below!

*  This book was sent to me by the publisher in exchange for an honest review! Thank you to Fiery Seas Publishing!

** This is an affiliate link